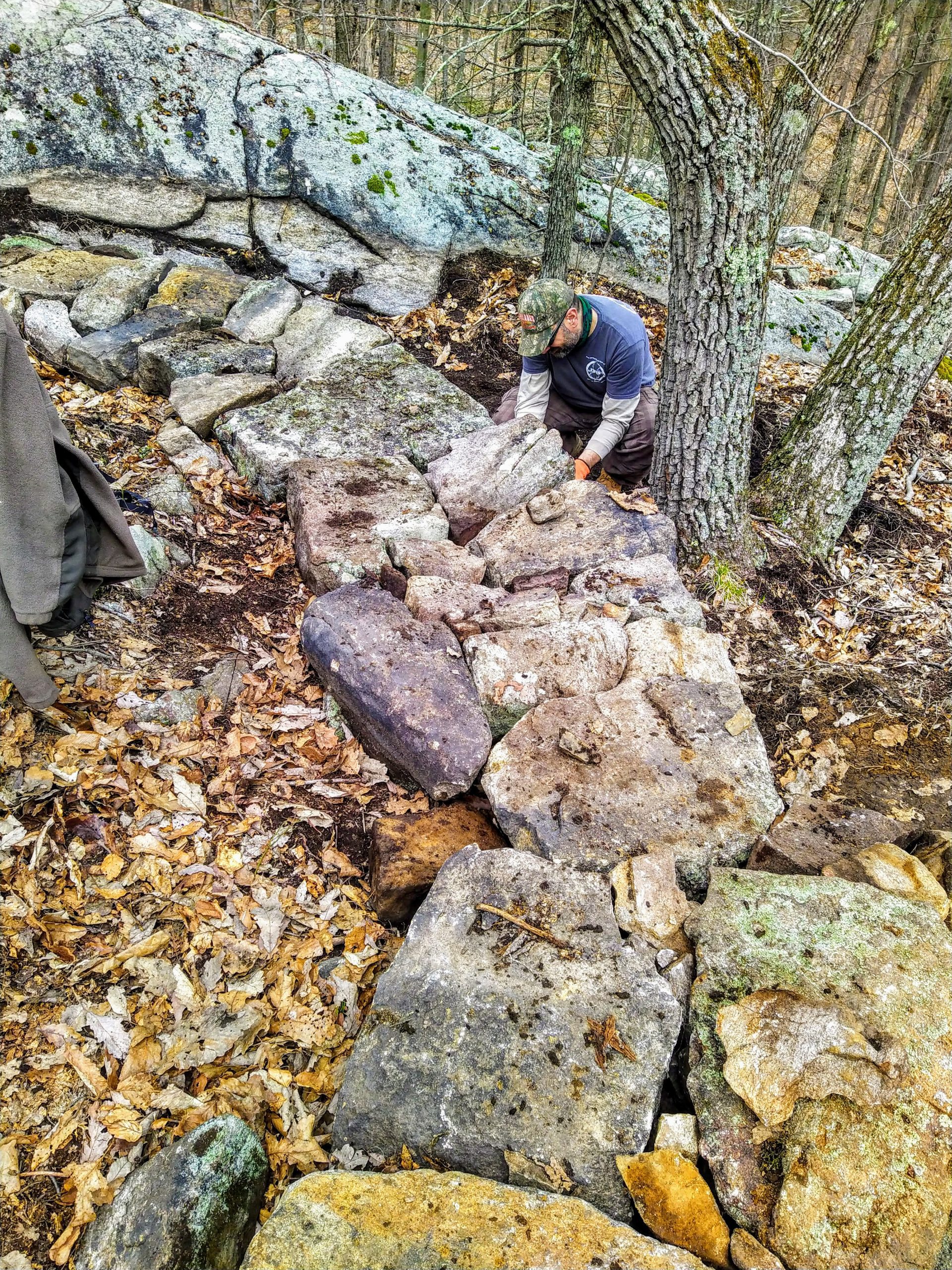 The map shows the proposed Tapawingo route under construction. Many of the existing trails are hike a bike, some stream crossing are difficult. If you want to explore please stay on this route. We will be working to improve the trails.

Tapawingo by JORBA on Trailforks.com

Jointly-promoted JORBA/NYNJTC volunteer work trips are ongoing. Currently we are working on the section, called stags.

Stags an Accessible Connection from Cages to Tapawingo

Stags will fix an unsustainable section of the legacy Hewitt-Butler trail connecting tanks and cages to Tapawingo. It will be NJ’s first accessible trail for adaptive riders. Please visit the Stags project page for more information.

The connection from Rhino to Tapawingo. The section is completed and opened and called Ryno.

The completed trail Ryno on Trailforks.com

Rhinoplasty will provide an easier direct route to Tapawingo as opposed to the more difficult Hungry Bird. Work will comense once the rest of the project is completed.

Lay out and build the new connector between existing Hewitt-Butler and woods road.

Construction of a new connector trail segment, approximately two miles in length. This trail segment would be built in accordance with the “Best Practices” section of this document, including low-impact construction and a primitive trail tread only 18”-24” in width.

Taps does not yet exist but you can help JORBA build it.

Work started on the Paiute Trout Trail in the fall of 2020. Eventually Paiute will be the main connection on Tapawingo between Long Pond Iron Works in the north and northern Norvin Green in the south. Work in Norvin Green is suspended as requested by NYNJTC.

Work Started in the fall of 2020 to be completed with the new Taps trail.

Place new blazes along existing trails and woods roads, as indicated in the maps that follow, to be used immediately with no trail work or construction needed.

In perpetuity: NYNJTC and JORBA will cooperatively maintain all trails depicted on the proposed final trail configuration map to standards consistent with other trails in the region. Please note that no part of this document constitutes anything beyond a recommendation, and that the estimated timeline above is not a commitment or obligation of any kind.

Existing route will be made sustainable with improved connections to Jungle Habitat and approximately two miles of new trail.

2020.07.02 The land management review for the adoption of the existing trails, addition of the new and the installation of the bridge passed with conditions;

BFF is ok with project but ensure fish passage at stream crossings and avoid approach of streams from steep slopes to minimize streambank erosion.

If any trees  larger than 5″ DBH will be felled:

This project was submitted for Land Management Review to NJDEP in the summer of 2019.

The Jersey Off-Road Bicycling Association (JORBA) and the New York-New Jersey Trail Conference (NYNJTC) have collaborated to jointly propose a plan which aims to improve trail conditions and connectivity within the property formerly known as “Jungle Habitat” – referred to as the Mountain Biking Area in this document – as well as contiguous trails in Long Pond Ironworks State Park and northern Norvin Green State Forest. We seek to consult with Ringwood State Park personnel on defining and approving these recommendations, which will have minimal environmental impact due to their primary utilization of existing trails and woods roads under management of the Ringwood State Park office.

We believe that expanding both multi-use and hiker-only trail opportunities in the area will provide the following benefits:

In order to improve and maintain these trails, NYNJTC and JORBA will collaborate with State Park staff for all necessary approvals and permissions. On the following pages we present several photos which show what the existing “unmaintained trails” and “woods roads” look like on the ground. We wish to emphasize that most of the newly-adopted trails recommended in this document already exist and are already being used by people, with only trail blazes and occasional spot-fixes needed to make them easier to navigate for hikers and bikers.

The two groups collaborating on this document both specialize in volunteer-led trail work, from layout and design to construction and maintenance. Both have extensive histories executing projects alongside State Park partners, as well as other land management agencies.

The photographs that follow were all taken during joint JORBA-NYNJTC scouting trips of the area in question. Nothing was suggested without first being explored on the ground, and the close spirit of collaboration ensures that any suggestions adopted from this proposal will have the support of both hiking and biking representatives.

Both JORBA and NYNJTC are well-versed in the art of sustainable trail design and construction. These skills are best utilized in the construction of brand-new trail, since older trails and woods roads often have significant layout problems that are difficult to remedy.

This proposal features only one new stretch of trail construction, located between the power line utility right-of way and the Burnt Meadow wetlands (see map on page 11, with area of interest shaded in yellow). This would be built in the vein of similar “primitive footpath”-style trails, with a tread surface of roughly 18”-24” in width. See images to the right and below for an approximation of what such trail looks like upon completion. Trails built correctly in this style are low-impact, cause minimal disturbance, and are easy to maintain by volunteers with hand tools.

Volunteers of NYNJTC and JORBA would conduct joint work trips to execute any new trail design and construction. Trail design would follow best-recommended practices of the International Mountain Biking Association (IMBA) and United States Forest Service to ensure sustainability of the natural trail surface. Trail design and construction would be carefully planned to minimize impact to the natural surroundings, and sensitive wetland areas would be avoided. The trail would be primarily developed through the use of hand tools such as rakes, picks and shovels, with any use of power tools discussed with and approved by the appropriate NJDEP personnel.

The majority of this proposal utilizes existing woods roads and unmaintained trails. These are already well-established on the ground and are already being used by people, so we seek only to have them marked and formally recognized for easier navigation. In some instances, the existing woods roads may have issues with water drainage or unsustainable paths directly up steep slopes. In such instances we would seek to relocate the trail as needed to briefly avoid the affected area, never going more than 200’ from the existing disturbed corridor before. Such changes would be so small as to be imperceptible on standard trail maps.

The following pages show several maps which help to illustrate the existing trail configuration, proposed trail changes, proposed final trail configuration, and a detailed look at the proposed final trail blazing in the northern Norvin Green area. By necessity, the maps embedded in this document are small. High resolution PDFs can be found in the attachment sent alongside this digital document. Implementing all of the recommendations will not take place overnight. Below is a very rough timeline of when we might expect certain implementation actions to take place.

The map depicting the proposed final trail blazing in the Mountain Biking Area was crafted based on the recommendations of experienced mountain bikers who are intimately familiar with the existing trail network. While stacked loop trail systems are preferred, in the case of the Mountain Biking Area they are not feasible due to negative control points that limit the placement of the trails allowing only point to point travel. However, even without loops the network of trails provides a variety of options and choices for users to enjoy the park.

Currently, all trails in Norvin Green State Forest State Park are designated for hiker use only. After extensive discussion, both JORBA and NYNJTC have agreed that the Tapawingo Trail Loop seen in the proposed final trail configuration should be designated as a multi-use trail suitable for both hikers and bikers. This greatly expands the biking opportunities available from the Mountain Biking Area by added a 5.25-mile loop for those seeking a longer ride. Much of the Tapawingo Trail Loop is repurposed woods road, and already suitable for bicycle use. Preserving the hiker-only designation of all other adjacent trails in Norvin Green and Long Pond Ironworks ensures that there are opportunities available for people seeking that experience.

While most of the recommendations in this plan will have little or no direct impact on the ground beyond mounting new markings and addressing drainage problems on existing paths, two projects will need additional review. The first is the construction of a new connector trail segment, approximately one mile in length. A potential route is shown below. This trail segment would be built in accordance with the “Best Practices” section of this document, including low-impact construction and a primitive trail tread only 18”-24” in width.

The second is a bridge 41.10848, -74.33774, the center of the red shaded circle in the image above. The channel is deep and both banks are stable parts of an existing woods road, making material delivery and installation relatively straightforward. A pre-engineered and prefabricated truss bridge as seen below, approximately 40’ in span, would be the ideal solution for this site. We seek the Park’s assistance in acquiring any necessary permits and will in return assist with funding and installing the bridge.

The Hewitt-Butler Trail, at one time, connected the northern and southern parts of Norvin Green State Forest. Braen Quarry currently severs the trail and it exists in disjointed segments. While the Hewitt-Butler trail could be preserved in its current state, our proposed final trail configuration shows the trail removed from northern Norvin Green and Long Pond Ironworks. This removal is in recognition of the fact that most modern hikers prefer loops, as reflected in this proposal, and relatively few modern hikers seek to follow the Hewitt-Butler route. In addition, removing the Hewitt-Butler results in less “co-blazing,” the practice of having multiple trail markings on the same tree, which can be confusing when done in excess. We recommend that the portion of the Hewitt-Butler south of West Brook be retired, and up to the Manaticut Point Loop be re-blazed pink as an extension of the West Brook Connector. Through the rest of the trail network, the blue Hewitt-Butler blazes should be removed or repurposed as part of the blue Tapawingo Trail Loop.